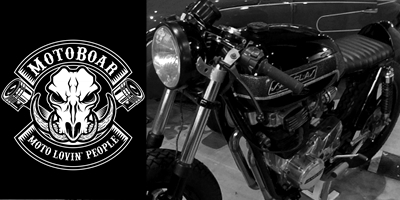 Everyone now wants to grasp a vintage bike, they’re trendy these days and you cannot deny they have that old fashioned taste for design we seem to have lost.

Modern bikes are much better, faster and more reliable than any old iron, however, your daddy’s old ride still has a second chance these days. They are awesome looking machines.

The picture on this post is a long taken one, in a classic vehicle exposition. It is an old Spanish Sanglas in the process of customising. It’s incredibly great looking and I wonder what has finally happened to it.

It was shocking to find out it wasn’t still finished when it was taken to the event, as it took me a while to notice… but there’s not a clutch wire and that counts.

Old bikes were also oily and greasy devices who would let an oil puddle as they were constantly leaking. They were not reliable as they decided they wouldn’t start certain mornings, evenings, or whenever she felt like it.

No wonder somebody had the great idea of a modern classic. They actually keep the essence of the good old rides with a much more reliable engine and performance. Drum brakes and old frames used to literally suck.

When men were men… and women were women

I like the expression when men were men… it reminds me of dad and granddad and their challenges riding these old Sanglas for the Police forces in Southern Spain. I know it was mostly men, but some women used to ride too -therefore the heading.

Back in the day when a biker was half a mechanic, when good asphalt was no longer than a few feet before a bump and when motorcycle equipment didn’t exist at all, riders faced the unknown.

What a time. Riding under the elements some fifty of sixty years before heated grips were invented and ABS was nothing but a futuristic nonsense. How many good souls lost, and how brave you had to be.

But back in the day, there were not many options. That’s the spirit, anyway, ride because you must. Ride because that’s who you are.

Most motorcycles nowadays have better technology than the space rocket that went to the moon, and you just ride it to get to that coffee shop up in the mountain. Nothing wrong, but as a biker, do you know your roots?